Minister S Iswaran hosted Ireland’s Minister for Business and Innovation, Heather Humphreys, with a trade mission of some 40 companies to Singapore in March 2019

2019 was a busy year for the team at Ireland House in Singapore.  The priority of the team, led by Ambassador Patrick Bourne, is to enhance the already strong friendship between Singapore and Ireland and to highlight all the great advantages that Ireland has to offer as a place to do business, invest, study and holiday.

The National Day event on St Patricks Day, March 17th, was, as always, one of the most popular and enjoyable events of the diplomatic calendar.  It was attended by Ireland’s Minister for Business, Enterprise and Innovation, Heather Humphreys, and featured a showcase of sumptuous Irish food and drink products. 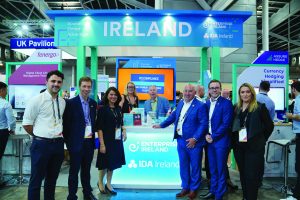 Two-way trade and investment was top of the agenda when the visiting Irish Minister met Minister S Iswaran during her visit.  Trade between Ireland and Singapore grew to more than S$10 billion, and the Ireland House team, which includes personnel from Enterprise Ireland and the Industrial Development Authority (IDA) Ireland played host to an ever-growing traffic of Irish investors and innovators during 2019, including at the Fintech Festival in November.

Culture and the arts are very special calling-cards for Ireland and the Embassy engaged in an extensive programme of high-quality and high-profile events during the year to promote cultural links and exchanges with Singapore. The inaugural Irish Film Festival, in October, introduced the movie-lovers of the ‘Red Dot’ to the movie-makers of the ‘Green Dot’, and was a great success.  On the literature front, the Irish Embassy

celebrated the classics – James Joyce’s Ulysses on Bloomsday – and the contemporary, with a visit by best-selling author John Connolly in August.  As for music from Ireland, it can be covered in two characters… U2!  Ambassador Bourne and his team were really proud to welcome Bono, The Edge, Adam and Larry for their first-ever Singapore concerts as a very busy year drew to a close. As they say in Ireland, ‘Sláinte, meaning good heath to all of you for the New Year ahead.