EMBASSY OF THE HASHEMITE KINGDOM OF JORDAN 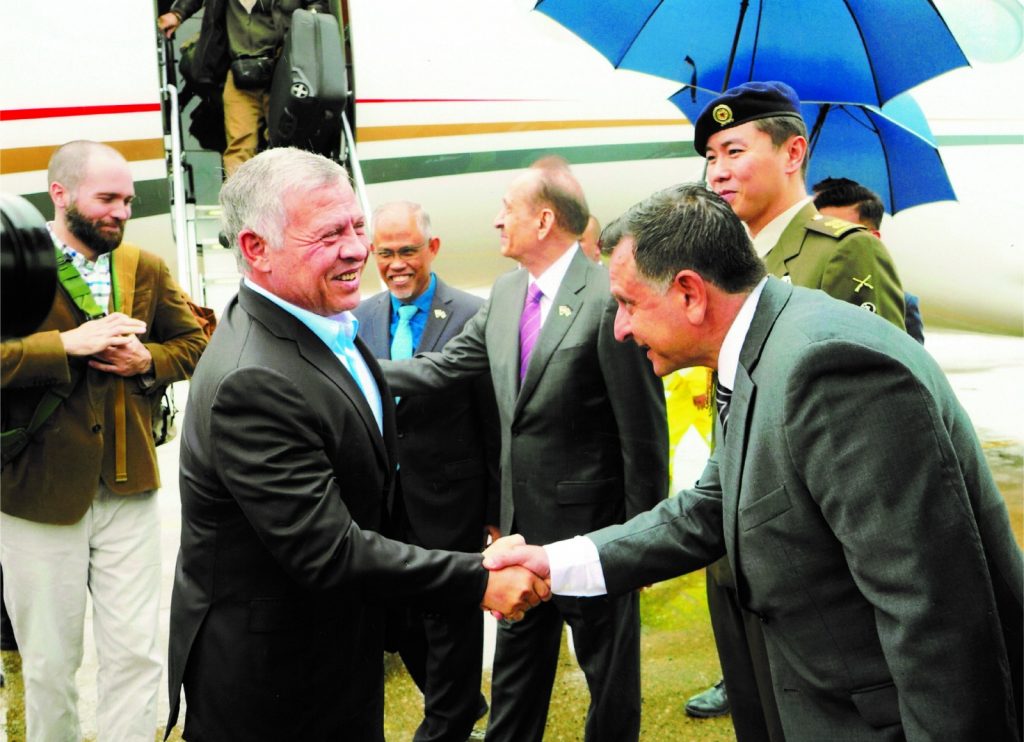 The Hashemite Kingdom of Jordan has a very special relationship with Singapore. Both play a pivotal role in promoting interfaith understanding and dialogue between different communities.

It was an exciting time for the  Embassy of Jordan in Singapore when His Majesty King Abdullah II ibn Al Hussein of the Hashemite Kingdom of Jordan arrived in the city state for his third State Visit. The flurry of activity revolved around a tight agenda for the leader who was here at the invitation of President Halimah Yacob of the Republic, from 19 to 20 June 2019. One of the major highlights of the His Majesty’s visit was his delivering the Keynote Address at the International Conference on Cohesive Societies on 20 June 2019. Also on the agenda was a visit to the Singapore Armed Forces Commandos on 19 June 2019 followed by a visit to Nanyang Technological University on 20 June 2019. King Abdullah II  was also looking forward to his meeting with business leaders at a roundtable organised by the Singapore Business Federation.

A lavish welcome awaited King Abdullah II at the Istana . He  was greeted warmly by President Halimah, when he came to pay a courtesy call on her.

In his keynote speech at the inaugural International Conference on Cohesive Societies, as a global leader in promoting interfaith understanding and dialogue, His Majesty spoke strongly about the need for people and nations to push back against the attack on interfaith harmony, mutual respect and trust. To add a greater thrust to his commendations King Abdullah II pointed out that every global challenge in the 21st century demands that countries and people resist hatred and exclusion.The conference, held from June 19 to 21, was aimed at promoting understanding between different communities.

President Halimah during their meeting thanked King Abdullah II for delivering the keynote address at the International Conference on Cohesive Societies. Both leaders agreed on the importance of inter-faith dialogue and tolerance, as well as the promotion of peace and harmony among different races. Both sides also discussed regional developments and counter-radicalisation.

On 20 June 2019 the high points of the meeting of King Abdullah II and PM Lee Hsien Loong were discussions on the developments in the Middle East. Both leaders also reaffirmed the strong bilateral cooperation in many areas, including education and efforts to promote inter-faith and religious moderation. King Abdullah II and PM Lee also exchanged views on ways to strengthen economic links between Jordan and Singapore, promote mutual investments, cooperate in IT and furthering ties between their academic institutions.

The roundtable emphasised the importance of benefitting from Jordan’s and Singapore’s positions as gateways to trade and investment to the Middle East and Southeast Asia respectively, taking into account the facilities contained in the Free Trade Agreement and the Bilateral Investment Treaty concluded between the two countries in 2004. Madam Halimah expressed her hope that the forum will “pave the way for more businesses to collaborate with each other, and help strengthen economic links and promote mutual prosperity of our two countries”.

Madam Halimah lauded the King’s role in promoting religious moderation and the importance of interfaith dialogue and tolerance. “I am confident that your wise words will have a positive and lasting impact, not just in our respective regions but also in other parts of the world,” she said. She further noted that: “In an increasingly polarised world where lines are drawn along ethnic, religious and other identities, we need strong voices of reason and advocates of peace among global leaders to protect our world from disintegrating. Your Majesty is one such voice.”

Two Memoranda of Understanding (MOU) were signed during King Abdullah II visit. The first was on the Establishment of a Bilateral Consultation Mechanism to enhance communication between the officials of the two nations. The second MOU was on Water Resources Management  which was signed by Jordan’s Ministry of Water and Irrigation and Singapore’s Ministry of the Environment and Water Resources.