An almost full capacity crowd at Norway Night 2019 – THE maritime network event of the year at the spectacular The Clifford Pier. (Photo: Iskandar Ahmad)

In 1906, less than a year after Norway’s independence, the country established a Consulate-General in Singapore, and 50 years ago – on 7th March 1969 – it set up a full-fledged Embassy. To celebrate this friendship, Norway has through the year hosted a slew of events which have been pivotal to enriching the cooperation between both nations.

In March, there was a timely visit by Members of Parliament, which gave us an opportunity to celebrate the Embassy’s birthday. The day after, the visiting parliamentarians as well as SMS Lam Pin Min were Guests-of-Honour for the annual Seafood Dinner. The @50 birthday celebrations officially ended in May when we invited friends and partners to a National Day Celebration at the Asian Civilisation Museum.

Visit by Minister of Trade and Industry

In February, the Minister of Trade and Industry, Mr Torbjørn Røe Isaksen stopped by to look at what makes Singapore the most important hub for Norwegian businesses in Asia, and why more than three quarters of Norwegian direct investments into APAC go to Singapore. He met his counterpart Minister Chan Chung Sing as well as a number of Norwegian companies. He was particularly impressed with the many innovative partnerships between our two countries and the dynamic start-up scene in Singapore. 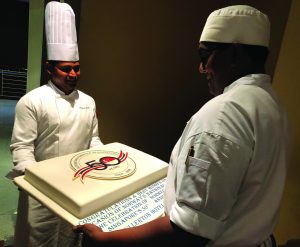 Visit by Norwegian Parliamentarians – and the Annual Seafood Dinner

Members of Parliament of Norway, taking a larger interest in developments in Southeast-Asia, visited Singapore in March. They met a number of counterparts and experts, and gained new insights into political, economic and social developments in this region. They also took part in several events. On 8 March, the Norwegian Business Association in Singapore together with the Embassy, Innovation Norway and the Norwegian Seafood Council, had the pleasure of inviting friends to the biggest ever Seafood Dinner. 1100 guests enjoyed first class Norwegian seafood, prepared by top Singaporean and Norwegian chefs! We were honoured to have SMS Lam Pin Min and Members of Parliament from Norway as Guests of Honour.

During Singapore Maritime Week in April, the third edition of “Norway Night” took place at the spectacular Clifford Pier. During this magic night of live music and Norwegian seafood, we welcomed 450 guests, including Guest of Honour SMS DR Lam Pin Min, to a lively celebration of our two countries’ longstanding maritime relations. The Embassy appreciates MPA’s assistance, and would like to thank a number of Norwegian maritime companies for the generous support.

Norway adopted its Constitution on 17 May in 1814 – almost a century before we gained our independence. On the occasion of the National Day, we celebrated our friendship with Singapore and the 50th Anniversary of the Embassy at the Asian Civilisation Museum. We were honoured to have with us SMS Dr Lam Pin Min. The celebration reflected beautifully the many ways and areas in which Singapore and Norway cooperate and engage. 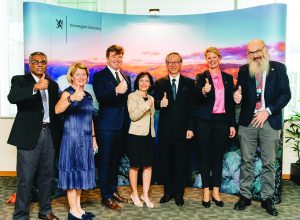 Singapore is an Observer State in the Arctic Council. In order to deepen the cooperation on Arctic issues, and increase the awareness of why the Arctic is relevant also in the tropics, the Embassy with partners organised an Arctic conference on “Knowledge for Ocean Sustainability” at NUS in October. With partners like Arctic Frontiers, NUS, Innovation Norway and Eco-Business, the programme was both substantial and topical. Minister of State, Ministry of Foreign Affairs & Ministry of Social and Family Development, Mr Sam Tan and the Deputy Minister of Petroleum and Energy of Norway, Ms Liv Lønnum, opened the conference. The impressive list of speakers included high-ranking representatives from business, academia and government. In the evening, the documentary “Arctic Awakening”, produced by Eco-Business after a visit to Norway, was screened as part of the exhibition “Changing Course 2019” at the ArtScience Museum.

In October, Singapore hosted the ITS World Congress 2019. A delegation of 75 people visited from the transport sector in Norway, led by Minister of Transport Jon Georg Dale and Deputy Minister Tommy Skjervold. The delegation gained insights into Singapore’s integrated city and transport planning; the MRT-system; dynamic road pricing; use of AI and other technologies to meet future challenges within the transport sector; as well as piloting of autonomous buses. Smart mobility will clearly be important for us to achieve our “Smart Nation” objectives.

In November, Minister of Finance Siv Jensen had agreed to speak at the Singapore FinTech Festival 2019, which attracted close to 60 000 participants. With a focus on sustainability, she could draw on many experiences from Norway. While in Singapore, she met her counterpart, DPM and Minister of Finance Heng Swee Keat, as well as a number of other actors in the finance field. A stop at the APAC office of the world’s largest sovereign wealth fund, the Norwegian Government Pension Fund Global, was a natural part of the programme. The Minister, Deputy Minister and the rest of the delegation let Singapore full of ideas on how to support and promote the dynamic Fintech scene in Norway.